Statement of Hon’ble Foreign Minister on Inaugural Ceremony of the Annual Thematic Meeting of the Platform on Disaster Displacement (PDD) at Hotel InterContinental, Dhaka. 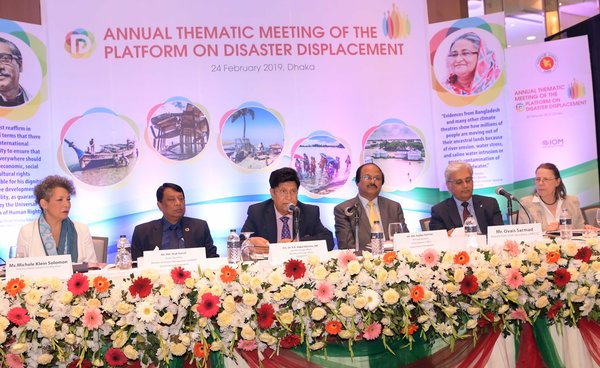 Let me extend my whole hearted welcome to all of you to Dhaka. Last week, while we were observing our historic “Shoheed Dibosh” or International Mother Language Day, We suddenly faced a sad episode, nearly 67 of our residents of Dhaka died of fire accident. I pray for all the departed souls and wish the injured ones to get well quickly.

I am pleased to notice that the 2019 Thematic Meeting of PDD, Platform for Disaster Displacement is being attended by an assembly of high level delegations and experts. Displacement due to either slow or sudden onset disasters is a global problem, more aggravated due to erratic climate change and environmental degradation. As natural disasters are occurring more frequently with higher ferocityand intensity, and causing forcible displacement of people across nations and since it is a global issue, it is imperative to design and develop corrective actions globally with a view to lessen its devastating impacts. Scientists predict that if the greenhouse emissions is not reduced, there would be melting of polar Caps, depletion of ozone layer, erratic behavior of climate globally and slow but gradual increase of sea level resulting in profound devastating impact on humanity more dangerous than tsunamis.

As per various estimates, climate change will put extra 50 million people at risk of hunger by 2020 and likely to derail the achievement of SDGs. (And as per the a Sendai Conference due to disasters, nearly 1.7 trillion would be lost  annually)

Climate change is indeed, one of the most serious challenges that humanity have ever faced, its not because Super Storm Sunday on New York caused 60 billion loss and damage in few hours. As per Climate Vulnerability Monitor, climate change causes 4,00,000 death each year and climate related losses accumulated to 1-2 trillion or 1.6% of the global GDP in 2010. Such loss is expected to increase rapidly reaching 6 million death and 3.2% of GDP in net average by 2030 as per CVM.

The modest achievements of developing countries, particularly of LDCs might vanquish in the blink of eyes by a sweep of cyclone, flood or land erosion. In addition such havoc is likely to create ‘environmental refugees’ or ‘climate migrants’.

Let me share a story with you. I met a rickshaw puller in Sylhet and I asked him why he travelled all the way for Southern coastal belt of Barisal. He replied, due to erosion of his cultivable land that has been washed away due to river erosion, leaving him no option but to move to a higher plain with his family for safety and security and now he is trying to earn a living just to survive. He is not alone. In the capital city of Dhaka, out of its estimated 19 million residents, nearly 1/3rd are just like that floating population, forced out partly as their homes or living firms have been washed away their land is not enough to provide their living due to climate change.

Recently World Bank predicts, 1 meter rise in the sea level will inundate 20% of its coastal region leaving 25 to 30 million people without home, without jobs. Question is where these climate change migrants should go?

As per World Bank’s “South Asias Hotspot Published in September 2018” more than 3/4 quarters or 134 million out of 165 million population of Bangladesh or 82% are at risk of declining living standards as a result of erraticclimate change, rising temperature could affect living standards in diverse way. Top among theseare fall in agricultural and labour productivity and rise in spread of vector borne and other infectious diseases resulting in lost productivity and income.

The decline in living standards as a result of changes in average weather could cost a loss of 6.7% or 171 billion of Bangladesh’s GDP by 2050 unless actions  are takento reduce emissions and global annual average temperature increase. Great cities like New York or Boston especially their great institutions like Harvard & MIT and financial towns will be under water.

In fact, cost of inaction will be highest for the severly affected regions, amounting to 59 billion or 14.4% loss in GDP by 2050. If the current trend is not reversed, then nearly 800 million people of South Asia will be affected and if corrective actions are taken, then around 370 million would be affected. As per World Bank report, except Sylhet and Rangpur, most of Bangladesh specially Barisal, Khulna, Dhaka, Rajshahi and Mymensingh Divisions will be affected badly.

In 2017 when flash flood inundated the Haor area, 75% of its crop was inundated resulting in loss of 22 lakh tons of rice, 11 lakh 35 thousand families were affected, 2 thousand tons of fish and 30 thousand ducks were killed. In fact, loss was estimated at Tk, 13,000 crore or $ 1.5 billion.

Since Bangladesh is one of the most vulnerable country in terms of climate vulnerability , its Prime Minister Sheikh Hasina took corrective actions to live with climate change. She adopted “Climate Change Strategies & Action Plan” as early as 2009. She also involved communities and created 60,00 well trained volunteers and erected nearly 3,800 cyclone Shelters plus afforestation. In addition, Bangladesh erected embankments to nearly 70-80% of coastal areas and arrange irrigation facility in 80% of its cultivable areas. It also developed flood resistant salinity resilient Crops to adopt and live with Climate change.

In addition, to face challenges in climate change, Bangladesh adopted 100-year Delta Plan. This plan is designed in association with the Netherlands-strategies are developed to live with and overcome hazard of climate change. However, this programme may cost an additional 2.5% of GDP each year and by 2031, in terms of dollars, it would cost $29.6 billion. The government of Bangladesh proposes to undertake 80 projects during its first 10 years from 2020-30 costing around 2,97,827 crore taka or $ 37.5 billion andsuch will help increase our GDP by 1.5% for its current 7.86%. However, it’s a daunting task to arrange funding for its as majority of funds should come from private sector. In addition, we would need to put up higher embankments that would cost nearly additional $ 25 billion minimum.

As Prime Minister Sheikh Hasina visualized the gravity of the problem, she initiated many programmes to evade impending danger of climate change and no wonder, the UN awarded her its highest climate award the “Champion of the Earth”. Her initiativesespeciallyvarious mitigation strategies resulted in minimal less than 0.03% greenhouse emission in Bangladesh and in spite of the fact that, our country is not rich, yet she devoted substantial amount of its own hard-earned money to climate Funds. She established 2 climate Funds and initiated dredging of rivers and green afforestation. Unfortunately, recent influx of nearly 1.2 million Rohingyas of Myanmar are eating upour afforestation and creating environmental disaster.

Bangladesh is already considered a role model in the management of natural disasters. We have achieved commendable success in mitigating and adopting with climate change related challenges. Prime Minister proposes toredouble her efforts. But singular effort of Bangladesh is not enough. Government is open to any initiative at the regional and global level on this including the BIMSTEC, SAARC, Delta Coalition, Climate Vulnerable Forum and the Indian Ocean Rim Association (IORA). At the global level, Bangladesh is a champion in promoting climate issues.

In conclusion, the nature has its own course and will not wait for us.Whether we recognize it or not, climate change is taking place with increased numbers and ferocity of disasters. This surely will lead more displacement and unless we, as global citizens, commit ourselves to face these challenges with rock-solid commitment and determination. I am afraid, the problem will aggravate so much so that, it may be too late to reverse the course of misery displacements and human disasters.

However, I am always optimist. I believe, where there is a will there is a way. In fact, I believe in human ingenuity, innovation and creativity. They are “Ashraful Mokhlukat”, best of god’s creations. I believe, if they work together in collaboration with rock-solid commitment to save the planet earth and massive displacement owing to erraticclimate change, they will surely find a way out.

Let me hope that this meeting will provide us with an opportunity to rekindle our awareness and resolve once again and a “Dhaka Declaration” in that regard would be the ideal outcome of our joint efforts for a safer world.

I thank you all. Joy Bangla, Joy Bangabandh