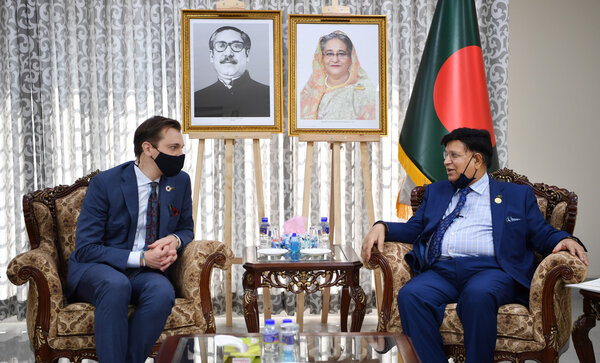 I wish to thank H.E. Mr. Per Olsson Fridh, Minister for International Development Cooperation of Sweden for his well informed and thought-out key note presentation. We appreciate his ready responsiveness to make this presentation during his maiden overseas visit as Minister. His erudition and articulation do attest to an illustrious career in public office awaiting him in the future.

The Swedish welfare system has indeed been a matter of lively debate and reflection in the international political and economic discourses for quite some time. The sense of idealism surrounding the system is reinforced by Sweden’s top rankings in most global welfare indexes, including in the UN Human Development Report. Despite its detractors, the Welfare State System has so far proved to be sustainable deriving strength from a portfolio of policy options that the Swedish Minister just recounted. The resilience also appears to have been due, to no small measure, the continuity of a political system and orientation over the years and to a growing reliance on adaptability in the public sector. It has certainly been useful to hear from Minister Fridh how the system has evolved through the years and has been calibrated to respond to the emerging national and global challenges.

Our interest in delving deeper into this system at this stage is not purely coincidental. This particular month of March marks a confluence of three major events in our national context: The high point of the birth centenary celebration of our Father of the Nation Bangabandhu Sheikh Mujibur Rahman, the golden jubilee of our independence and the conclusive decision by the UN for Bangladesh’s eventual graduation from the Least Developed Country (LDC) status. This is indeed a celebratory moment for our relatively young nation, but also one for reflection and conversations. This is the juncture where we must contemplate what our founding father had envisaged for an independent Bangladesh and how far have we moved along his desired direction as a nation.

Bangabandhu’s vision of a ‘Sonar Bangla’ was not just an aspirational utopia that he borrowed from Rabindranath Tagore in a display of his admiration for the bard and thinker. What is however remarkable is that this notion of ‘Sonar Bangla’ was not derived from the thoughts of eminent political economists since the European enlightenment, but instead got crystallized through Bangabandhu’s own life-long political struggles and close interactions with the people across the land. In the process, an idea of a service-oriented, inclusive and egalitarian state system emerged in his mindscape with a distinctly local cultural and environmental flavour. That is perhaps why the idea struck a chord with the masses in the quasi-colonial political and economic reality of East Pakistan, and helped mobilized people from all walks of life to take up arms to bring their freedom struggle to its logical conclusion through independence.

We are indeed fortunate that we now have an opportunity to trace the evolution of Bangabandhu’s thought process from his own accounts as captured in his Unfinished Memoirs, Prison Diaries and The New China as I Saw. There are numerous anecdotes, observations and policy statements across the pages of these writings that demonstrate the way a promising, young politician formulates his political vision that gets translated in to the historic six-points in 1966, the groundbreaking speech of 7 March 1971, and then the four fundamental state principles in the Constitution of 1972.

In the words of Dr. Fakhrul Alam, the English translator of the three publications, “Bangabandu realized early that the real enemies of our country are those who exploit ordinary men and women ... These books reveal amply his democratic and secular frame of mind and his attraction for socialism as well as his emerging vision of nationalism. Whether outside prison or inside it, we see him in the books as someone incapable of being cowed down by the intimidatory tactics deployed by arrogant politicians, hardened bureaucrats, sadistic police personnel or vicious military men.”

It was, therefore, quite evident why Bangabandhu embraced nationalism, democracy, socialism and secularism as the four pillars of the State he envisioned and led to its independence. In his political frame, they moved beyond their traditional definitions or confines and became representative of the notions of freedom and equality that he propagated through his formative and ascending political career. That also explains why the notion of democracy could easily coexist with socialism in his thought without contradicting or neutralizing each other. Likewise, his nationalism had drawn strength from Bengal’s linguistic and cultural heritage, but also stood for asserting the rights and identities of all the people across ethnic diversities that fought for their emancipation from the colonizing or occupying forces. In a similar vein, his notion of secularism embraced and accommodated all religions and represented his belief in the freedom to choose one’s own God and in the respect for all faiths and value systems. While there are unmistakable echoes of his political thoughts in what we just heard about the Swedish Welfare System, there are also certain distinct nuances that sets it apart in its entirety.

It was rather tragic for Bangladesh that Bangabandhu had a very limited amount of time to put his beliefs and visions into practice. He took over responsibility of a war-ravaged country with no foreign exchange reserve, dilapidated infrastructure, widespread poverty and an acute administrative and intellectual void. Even then, he commenced the arduous task of nation building through careful planning towards recovering economic growth and increasing food production, while rehabilitating the returnee refugees and internally displaced people as well as freedom fighters including the women and girls subjected to crimes against humanity by the occupying Pakistan forces.

Bangabandhu instilled dynamism amongst his people by saying, “We can rebuild the country through hard work. Let us work together so that Sonar Bangla shines again.” It was Bangabandhu who waived the debts of one million farmers, ensured seed and agricultural equipment supply at concessional rates, and introduced fair prices and rations for farmers. Despite having to nationalize the abandoned industries, it was Bangabandhu who had lifted the limit of private investments and favoured deregulation by handing over some factories in private ownership. It was also during Bangabandhu’s time in office that the non-government organisations (NGOs) started their operations in the country, mostly in order to fill the spaces left behind by international organisations following the relief efforts in the immediate aftermath of the War of Liberation in 1971.

In view of the recurrent insurrection activities by certain disruptive forces, endemic corruption and black marketing, Bangabandhu made a clarion call for a ‘Second Revolution’ to further stabilize a post-conflict nation that could potentially drift apart in a severely resource-constrained setting.  The brutal assassination of Bangabandhu brought this project to a halt, leading to much misinformation and misunderstanding about its constituent elements that did not even have a chance to get materialized.

It was, no doubt, a course correction by history that Bangabandhu’s able daugther, our Hon’ble Prime Minister Sheikh Hasina got elected for subsequent terms to build on the foundation he had laid down. The political freedom that Bangabandhu had ushered is now being matched by economic emancipation as we envisage taking Bangladesh to a higher-middle income status by 2031 and a developed one by 2041. In this trajectory, we remain engaged in a continued social and cultural endeavour through a whole-of-society approach to defeat the forces of communalism, extremism and obscurantism that remain active, including in the cybersphere.

In the domain of international affairs, our Prime Minister Sheikh Hasina continues to pursue our founding father’s dictum of “Friendship to all, malice towards none.” It may be assumed through Bangabandhu’s professed desire to turn Bangladesh into a “Switzerland of the East” that he found merit in the Swiss or Swedish notions of “neutrality” in the conduct of international relations. In the context of Bangladesh’s own geo-political realities in the backdrop of the Cold War, he opted for non-alignment with a clear bias for (in his words) “solidarity of the progressive forces of the world – that is for those who are oppressed and those who stand by them in their just struggles for liberation from oppression.” In his first and only address to the UN General Assembly in September 1974, he observed, “They [developed world] should recognise that they have a common interest in reversing the process which threatens to turn the world into one where a few islands of prosperity are surrounded by oceans of misery.”

It is in light of many of Bangabandhu’s near-prophetic pronouncements that we continue to engage with the world in addressing the emerging global challenges. The immediate, pressing concerns over pandemics, rising inequality, climate change, violent extremism and terrorism, and digital divide and cybercrimes can only be effectively tackled if all nations, big or small, commit to pull our collective resources and expertise for the common cause of humanity. Bangladesh has been doing its part by traditionally speaking out for upholding the interest of LDCs, by contributing to international peace by deploying her men and women in distant parts of the world, and by marshalling the voices of the climate vulnerable countries in favour of enhanced climate ambitions. On the humanitarian front, Bangladesh has taken on the burden and responsibility to give protection and temporary shelter to Myanmar’s persecuted Rohingya, with more than 1.1 million of them now on our territory. We continue to urge the international community to meaningfully commit to the Rohingya’s voluntary repatriation to Myanmar by helping create an environment conducive to such return in safety and dignity. It is much more than humanitarian assistance that the Rohingya need to reclaim their legitimate rights as members of the Myanmar society and actualize their potentials.

It was again Bangabandhu who had inspired us to think that, “as a human, what concerns humankind concerns me.” This same conviction motivated our Hon’ble Prime Minister to respond positively to the Swedish Prime Minister’s invitation to join the “Leaders’ Network” to deliberate on making the UN and multilateralism fit-for-purpose for the 21st century. In a similar vein, Prime Minister Hasina aligned Bangladesh with her Swedish counterpart’s initiative to promote social dialogue for decent work and sound industrial relations, with thrust on our export-oriented sectors. In this connection, we request Sweden to continue to promote responsible business conduct among European buyers and retails of our apparels and footwear to help offset the economic and social fall-outs of the pandemic.

We believe Bangladesh and Sweden have a common interest in working together to advance human rights, sound human mobility and human connectivity. We underscore our interest in further diversifying our traditional development cooperation through enhanced trade, investment and knowledge partnership. We should commence working on at least one pilot initiative to jointly carry out research on technological or environmental solutions that can be beneficial for our peoples at the grassroots.

To conclude, I would like to remind ourselves of Bangabandhu’s words at the Fourth NAM Summit in September 1973, and I quote, “Our total commitment to peace is born of the realization that only an environment of peace would enable us to enjoy the fruits of our hard-won independence and to mobilize and concentrate all our energies and resources in combating the scourges of poverty, hunger, disease, illiteracy and unemployment.” It was as usual Bangabandhu who had given us the answer in our determination to forge ahead, and I quote, “Our ultimate resource is our people. We have seen in our times how a determined people can achieve its goal against what appears to be impossible odds.”

I thank you all.