Remarks by Hon’ble State Minister for Foreign Affairs H.E. Md Shahriar Alam, MP as the Chief Guest of the Webinar on 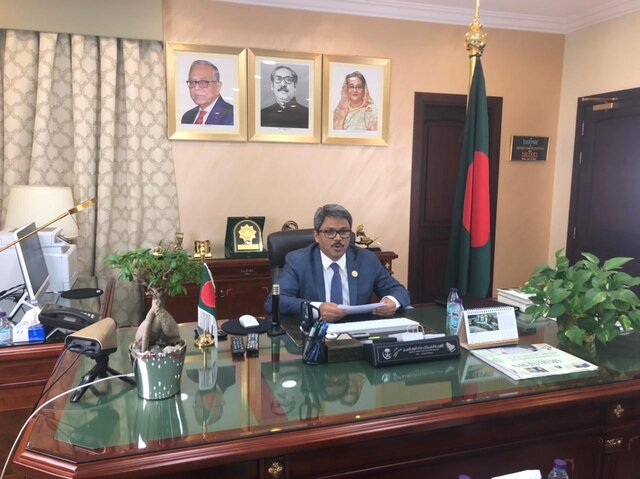 Ambassadors of Bangladesh and the United States

A very good evening and good morning to you all,

On the auspicious occasion of the historic 7 March, I would like to begin with my deep reverence to the memory of our Father of the Nation, Bangabandhu Sheikh Mujibur Rahman and his unparalleled contributions to our nation building. Let me appreciate the Embassy of Bangladesh in Washington, D.C. for organizing this important event to commemorate the historic 7 March Speech of Bangabandhu. I would also like to thank the U.S. Department of State, particularly the South and Central Asian Affairs Bureau for supporting this initiative.

Bangabandhu’s 7 March speech culminated the long and arduous struggle of the people of then East Pakistan for their democratic rights, economic justice, and cultural self-determination and united the Bengali nation as one with its magnetic power. When it became clear that the ruling coterie was unwilling to hand over power denying the people’s mandate, Bangabandhu called for a non-cooperation movement. The success of that movement is undisputed. In this backdrop, Bangabandhu delivered his historic address at a mammoth public meeting on 7 March 1971, which has now become part of the UNESCO’s Memory of the World Register. Bangabandhu’s clarion call to his fellow people “……..this time the struggle is for emancipation, this time the struggle is for independence” was the first ever declaration of independence of Bangladesh. This ignited the passion for freedom in the hearts of Bengalis, and there was no turning back.

Immediately after the independence of Bangladesh, the main challenge for Bangabandhu was to reconstruct a war-ravaged country. He took the helm in such a time when the economy was completely shattered, infrastructures and communications were completely destroyed. Under this difficult condition, Bangabandhu Sheikh Mujib had to secure international recognition, assistance for reconstruction of the country and mark Bangladesh’s presence on the world map as a self-reliant nation. In order to accomplish these enormous tasks, Bangabandhu realized the necessity of reaching out to all the friendly countries and the major powers of the world.  The foundation of the warm bilateral relationship between Bangladesh and the U.S. was also laid down by Bangabandhu Sheikh Mujibur Rahman at that time. Bangabandhu was the first Head of Bangladesh Government to visit the U.S.A in October 1974 and met then US President Gerald Ford to discuss issues of bilateral interests.

The cardinal principle of our Foreign Policy, “Friendship to all, malice towards none” was laid down by Bangabandhu. His political and philosophical worldviews were shaped by his deep-rooted bond with his own people, era, culture, socio-political circumstances, and the larger society. In fact, the foreign policy that we are pursuing today under the dynamic leadership of Bangabandhu's daughter, Prime Minister Sheikh Hasina, represents the fundamental values and principles that Bangabandhu presented to the world body. While protection and promotion of our national interests remained the core priorities, our overarching objective is to achieve Bangabandhu’s dream, the “Sonar Bangla”, a modern, vibrant, and economically prosperous country where no one is left behind. Bangladesh’s diplomatic strength lies in her engagements in various normative and policymaking initiatives including promotion of international peace and security through peacekeeping and peacebuilding activities.

Dear friends from the United States,

Since Bangabandhu’s first official visit to the United States, we have converged in an expanding collaboration in the pursuit of our common foreign policy objectives, both bilaterally and beyond. The philosophy of Bangabandhu’s 7 March speech resonates the strong foundation of our relationship, which is based on the shared values of democratic principles, peace, prosperity and freedom. Building on this, we would like to continue to have deeper and wider engagements with the United States. Bangladesh, in the same vein, is willing to work closely with the new U.S. administration focusing on all major areas of cooperation including Rohingya issue, investment and trade, climate change, capacity building, technology transfer, and a free and open Indo-Pacific region. I would also like to flag the important issue of the deportation of Rashed Chowdhury, a convicted killer of our father of the nation from the US to Bangladesh.

This year we have the rare occasions of celebrations of the birth centenary of our Father of the Nation and the 50th anniversary of Bangladesh’s glorious independence together. These historic events gave us an opportunity to spread the message of Bangladesh and its goodwill throughout the world. In this great journey as a nation, Bangladesh under the leadership of Prime Minister Sheikh Hasina will continue to uphold Bangabandhu’s brand of foreign policy which preaches balanced relations based on mutual trust and respect with great powers and good neighborly relations with all neighboring countries.

7 March will ever remain as a treasured part of Bangladesh history. It will always remind us of an inspiring, colorful and glorious tale of the fight of an unarmed nation for its sovereign existence for generations to come. Bangladesh will continue to follow Bangabandhu’s footsteps in its peace-centric and sustainable development focused approach in the conduct of her foreign policy.

I thank you all,