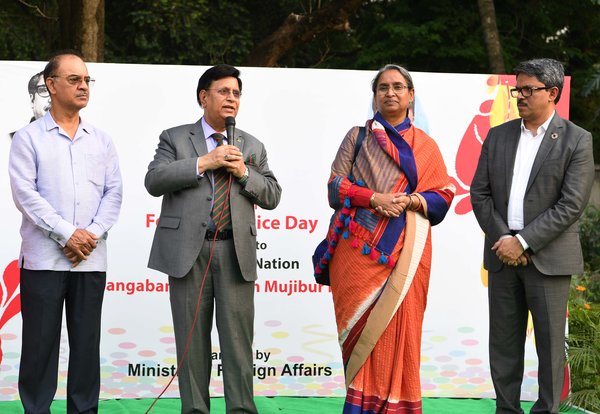 and Ladies and gentlemen,

Today, 18th April, is the Foreign Service Day of Bangladesh. Let me call it the “KutnoithikUthoranDebosh”.  On this day in 1971, 48 years ago from today, Bangladeshi diplomats and staff stationed in Calcutta defying the oppressive and occupation regime of Pakistan took over the Pakistan Deputy High Commissioner’s Office and hoisted the Bangladesh national flag atop and thus established the first Bangladesh Mission abroad. Therefore, this day is very significant for the independent and sovereign country of Bangladesh.

Let us salute those brave souls for their courage and of course, for their commitment to humanity and democracy.

On 17th April 1971, the Bangladesh government was officially established in MujibNager and on the following day, a group of Bangladeshi diplomats and officials led by Deputy High Commissioner Md. Hosen Ali and Third Secretary Anwarul Karim Chowdhury, declared their allegiance to Bangladesh government, and took possession of the premise of the Pakistani Deputy High Commission in Calcutta, India, and declared it ‘Bangladesh Diplomatic Mission’, which later became ‘Bangladesh Foreign Office’ in Kolkata.  The other officers who also defected in Calcutta on 18th April 1971 were Third Secretary KaziNazrul Islam, and Assistant Press Attaché Maksud Ali. We are pleased that today we have the privilege to honor few of them either in person or in absentia. It may be mentioned here that Shadin Bangladesh Sorker or MujibNager government was basically constituted on 12th April, 1971.  However, formal oath taking ceremony was held on 17th April at Boidonath, Meherpur inside the then free East Pakistan currently known as MujibNager.

We are also pleased to let you know that prior to 18th April, to be specific, on 6th April 1971, two brave Bangladeshi diplomats, Second Secretary K. M. Shehabuddin and Assistant Press Attaché of the then Pakistan High Commission in New Delhi AmzadulHaq defected and declared their allegiance to Bangladesh and opened the Diplomatic Front of the glorious Liberation War even before the establishment of the Mujib Nagar Government on 17th April.

We are thankful to Honorable Prime Minister Sheikh Hasina, daughter of the Father of the Nation Bangabandhu Sheikh Mujibur Rahman who was the spirit and guide of our independence movement and in whose name the Liberation War for Bangladesh was fought kindly allowed us to observe and honor the brave diplomats of 1971 by proclaiming this day as ‘Foreign Service Day’. We are privileged to honor few of those brave diplomats in today’s event.

Secondly, as part of preserving our historic legacy of the glorious war of liberation, we have created a corner in this historic building at Shugondha, 22 Bailey Road for remembering the 3 million victims of genocide of 1971, the second worst genocide since WWII. The bloodbath and mayhem of 1971 War took the lives of innocent people---3 million were killed, 200,000 women were raped, 10 million had to take shelter in neighboring India and 30 million were displaced internally due to our War of Liberation in 1971.  Lest we forget!

We carefully chose this building to house the Genocide Corner in a historic room. This building was built in 1960 and Her Majesty Queen Elizabeth II stayed in this house. After her departure, this house became the President’s House. After independence on December 16, 1971, this house became ‘Gonobhaban’ (People’s House), Prime Minister’s Office.  Bangabandhu Sheikh Mujibur Rahman, the visionary leader and founder of Bangladesh discharged his duties for nearly two years from this office (1972-74).  However, the Prime Minister’s Office was moved to the newly constructed Gonobhaban in Sher-e-Bangla Nager in 1974. We have placed a book in this Genocide Corner and we would be pleased if you write your comments.

I also thank all the organizers of the event and all the distinguished participants of the day.

On this occasion, while we remember our Father of the Nation Bangabandhu Sheikh Mujibur Rahman and the leaders of our Independence Movement plus   the sacrifice of our valiant Freedom Fighters, we also take a vow to help achieve the dream of Bangabandhu and that of ours, ‘Sonar Bangla’, a prosperous and stable economy by 2041.  Let us keep our dream alive, let us keep our hope alive.