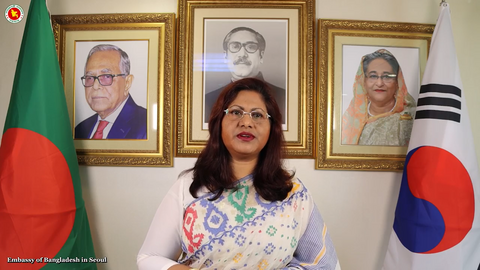 02.       The whole event was divided into two segments. The first part, conducted by Ambassador Abida Islam, consisted of congratulatory speeches by H.E. Sripriya Ranganathan, Indian Ambassador to the Republic of Korea, Padma Shri Dr. Kim Yang-shik, Director of the Indian Art Museum in Seoul and discussion on Nazrul’s poem-‘Bidrohi’ by Kalyani Kazi- the daughter-in-law of the poet Kazi Nazrul Islam. It also included the recitation of the poems including recitations of the poem-‘Bidrohi’ coupled with performance.  In addition, members of the Tagore Society of Korea recited Tagore’s poems in the Korean language from Gitanjali. The second segment of the event consisted of the dance and song recitals from the songs on the six seasons of Bengali calendar written by both Rabindranath Tagore and Kazi Nazrul Islam.

03.       Ambassador Abida Islam, in her remark, touched upon the invaluable contributions of both Rabindra and Nazrul to the development of Bangla language and literature, Bengali culture and to the context of the then socio-political scenario of Bengal.  She mentioned that Rabinranath is a familiar literary figure to the Korean people for his poem-‘The Lamp of the East’ whereas Nazrul is comparatively less known and the celebration of the ‘Rabindra-Nazrul Jayanti’ and centenary of the publication of the poem ‘Bidrohi’ is an initiative to promote the two literary genius of Bengali literature- Rabindra and Nazrul as well as their literary works and ideas to the Korean people. Mentioning about the celebration of the Birth Centenary of the Father of the Nation Bangabandhu Sheikh Mujibur Rahman, Ambassador Abida Islam said that Bangabandhu was greatly influenced by the ideals and philosophy of both Rabindranath and Nazrul and he also envisioned a society free of injustice and exploitation. Also, mentioning about the celebration of the 50th anniversary of the establishment of bilateral diplomatic relations between Bangladesh and India, she said that Rabindranath and Nazrul have shared treasures and have created an inseparable bond between the two friendly countries.

04.       H.E. Sripriya Ranganathan, Indian Ambassador to the Republic of Korea, in her congratulatory remark, mentioned about the ‘Tagore Jayanti’ which has been being celebrated jointly by the Indian Embassy in Seoul and Bangladesh Embassy in Seoul for past few years. She mentioned that Gurudev Rabindranath Tagore is an abiding cultural bond between Indian and Bangladesh considering his contribution to the composition of the national anthems of the two countries.  She also added that Tagore’s ideas expressed through his literary works are still relevant today and will continue to be significant in the decades ahead. Mentioning Kazi Nazrul Islam as a great poet, philosopher and revolutionist, Ambassador. Sripriya Ranganathan said that Nazrul is an inspiration for the people of both India and Bangladesh and his literary works bear the message of freedom, revolution, communal harmony and social equality of the underprivileged and downtrodden community. She also said that this celebration has indeed added dimension to the celebration of the birth centenary of the Father of the Nation of Bangladesh, Golden Jubilee of the Independence of Bangladesh and the 50th anniversary of the establishment of diplomatic relations that India shares in with Bangladesh this year.

05.       Padma Shri Dr. Kim Yang-shik, Director of the Indian Art Museum, in her remark, mentioned about the great contribution of Rabindra and Nazrul to the Bengali literature. To promote the literary works and ideas of these two literarfigures she particularly underscored the need of cultural exchanges. Mentionable that she has been accorded the Padma Shri award by the Government of India for her contributions.

07.       The second segment of the event consisted of Rabindra Sangeet and Nazrul Sangeet, dance recital and instrumental music centered on the six seasons of Bengali calendar. Members of Bangladesh Embassy in Seoul, Tagore Society of Korea and Bengali Association of Korea participated in this cultural event.

08.       It is hoped that the celebration of the ‘Rabindra-Nazrul Jayanti’ will play a significant role in promoting the ideas and philosophy of Rabindranath and Nazrul as well as creating interest and enthusiasm among the friendly people of Korea about the two greatest literary genius of Bengali literature.