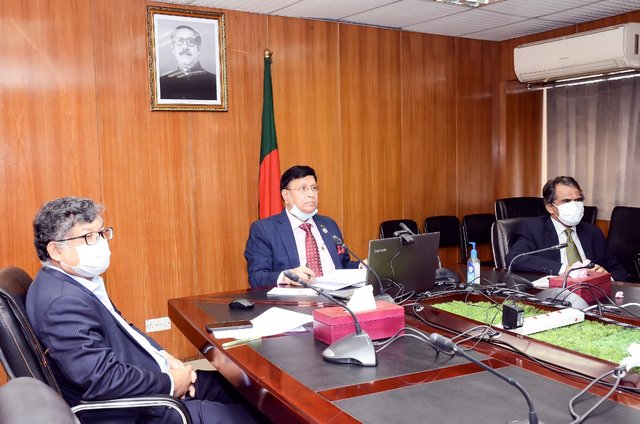 In the meeting, Foreign Minister briefed the Ambassadors of the EU Member States about the steps taken by Bangladesh in addressing the challenges of COVID19. The Ambassadors appreciated the initiatives by the Government to contain the pandemic, and offered helps of their countries in overcoming the challenge.

The Ambassadors informed that the EU would offer 334 million Euros to Bangladesh in the coming days, with 103 million or 1/3rd of that amount to be channeled through the Economic Relations Division of the Ministry of Finance. Foreign Minister thanked them for the support, and emphasised that it is important to ensure transparency and accountability of the aid activities carried out by the development partners. They should disclose publicly their spending so that tax-payers know where their tax money is being spent.

On the issue of the concern of COVID19 being spread in the Rohingya camps in Cox’s Bazar, Dr. Momen assured the Ambassadors that the Government is taking all necessary steps to ensure that the pandemic is contained, and there is minimal spread of COVID19 in the Rohingya camps. The Ambassadors discussed the issue of freedom of press, and Foreign Minister agreed with them about the importance of ensuring freedom of press and freedom of expression. He said there are nearly 33 private TV networks, hundreds of dailies plus a flood of online services which many countries even in Europe don't have. There is complete freedom of speech and media. However, he said, freedom without responsibility may result in social chaos and indiscipline. For example, in the name of freedom of choice, no one is allowed to open assault rifle to kill people in a crowded Mall or at a public school, neither one is allowed to incite or provoke people with fabricated stories to lawlessness.  He informed that the Government always considered the freedom of press as an important tool for effective governance in a democratic society.

On the issue of cell phone network in the Rohingya camps, Dr. Momen explained that the functionaries would be able to access the internet and 4G services from their offices and accommodations. For security reasons; to stop drug trafficking, to stop  trafficking of women and children, provoking people to create lawlessness and to stop Blue films, the government has to downgrade 4G services in the Camp area. However, they have 2G services which is enough for day to day communications. Moreover, for 4G facility, Rohingyas cannot afford to buy the Cell phone sets as these are 5 to 10 times more expensive vis-a-vis 2G cell phone sets. He assured that the Government would always protect the Rohingyas who have taken shelter in Bangladesh. In this regard, he stressed that providing shelter to Rohingyas was not the responsibility of Bangladesh alone. He called upon the Ambassadors to share the burden of providing better life and living for persecuted Rohingyas in their own countries or relocate and settle them in third countries. He said, almost 3 years have passed and although Myanmar agreed to take them back, not a single Rohingya went back home yet. He appealed to them to exert more pressure for their safe repatriation to Myanmar. The EU Ambassadors reiterated their appreciation for the humanitarian gesture by Bangladesh for the cause of the Rohingyas.

Dr. Momen reiterated that EU members are Bangladesh's long standing reliable development partners and if they have any issue, they are most welcome to share those with the government. However, he reminded them that Bangladesh per capita income is around 2000 US dollars with a density of population around 1200 per sq. mile. Our situation is different to that of the EU where their per capita income is around 50,000 dollars and density of population is as low as 15 per sq. mile. Therefore, one must be pragmatic.